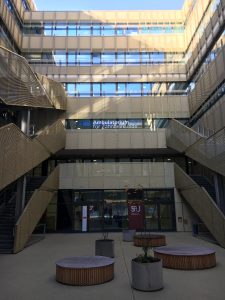 The SFU is located directly at the Messe-Prater stop of the U2 underground line and in the immediate vicinity of the Südosttangente and the A4 motorway. From here you can reach the city centre in 7 minutes by underground or Schwechat airport in 25 minutes. A particular advantage is the immediate proximity to the Prater.

Vienna is the national capital, largest city, and one of nine states of Austria. Vienna is Austria’s most populous city, with about 2 million inhabitants (2.6 million within the metropolitan area, nearly one third of the country’s population), and its cultural, economic, and political centre. It is the 6th-largest city by population within city limits in the European Union. The city is located in the eastern part of Austria and is close to the borders of the Czech Republic, Slovakia and Hungary.

Vienna is known as the city of music, due to its musical legacy, but also als city of dreams because of it being home to the world’s first psychoanalyst Sigmund Freud.

For more information on Vienna: https://www.vienna.at/


how to get there

How to get there
Subway U2 » stop “Messe/Prater” » exit “Messe” (approx. 5 minutes walk)
Bus 82A » stop “Südportalstraße” (directly in front of the building)

FROM THE AIRPORT VIENNA (VIE)

By taxi: It is only 25 minutes to the venue by car from Vienna International Airport. Official website: viennaairport.com

Important note: Please only use the taxi rank directly in front of the arrivals hall or the “City Transfer” counter in the arrivals hall. The price for the transfer from Vienna International Airport (VIE) to the SFU is around 25 €.

By train: Another possibility is to take the City Airport Train CAT, official website: https://www.cityairporttrain.com/en/home to Wien Mitte. From Wien Mitte you can go by REX train to Praterstern. From Praterstern Station you can get to the SFU by taking the underground U2. Please find details here: https://www.oebb.at/en/

It is recommended to order a taxi by phone or mobile app rather than to hail one on the street. The initial charge starts at 3,80 € and the price per kilometre varies from 1,04 €/km to 1,42 €/km. Taxi drivers are obliged to issue receipts on request.

Please find a selection of hotels close to the venue here

You can also find more hotels under Booking.com

Submit an ePoster and pay only 250€ Register soon